Visitors on a Beautiful Day 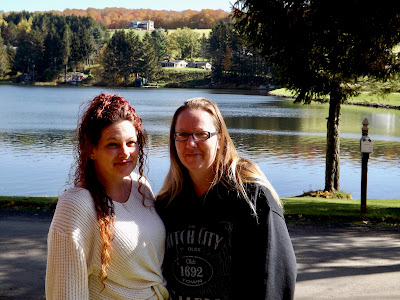 My granddaughter (L) and her cousin (R) drove here from upper NY state and we had a great visit. It was a three hour very scenic trip one way but they didn't stay over. I haven't seen her for several years due to the pandemic and then her uncle (my son) and his lady came to visit as well - a two hour trip to here! She had never met him in her lifetime as he is the brother of her deceased father. Another visitor stopped in! It was her aunt - my local daughter who has recuperated from the virus, and has had recent hip replacement. It was her first time driving herself. She does have to use her cane hook to help her move the leg in and out of the car, but was determined to visit. Of course she brought homemade applesauce for me and the last of her garden tomatoes to share with us.

I was too busy to take pictures but here is another shot of my granddaughter and her cousin, the driver! 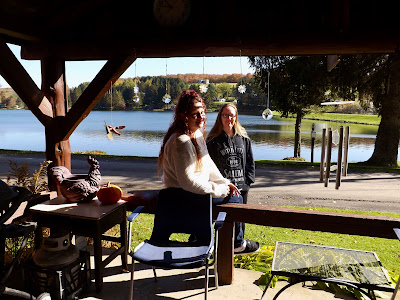 Later in the day, after things calmed down and NY went on the road to home, my son and his lady took a long buggy ride. It was perfect! He had picked up something on their way here that he wanted identified. I knew what it was but researched it anyway for them. We used to call them "horse balls" but I don't know why. I did know that the trees have long sharp spikes and were used as fence lines to retain farm animals. I took a picture of his find and then showed him the results of the research. 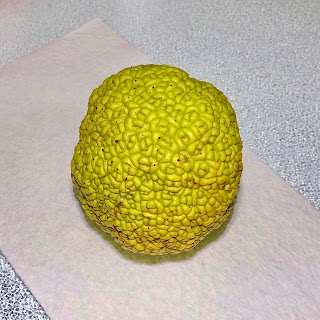 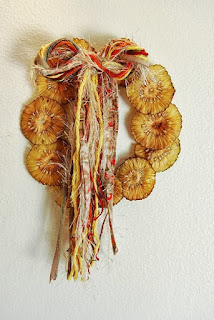 The “hedge apple” is the yellow-green, softball-sized fruit of the Osage-orange (Maclura pomifera).  The Osage-orange is a small- to medium-sized tree.  It commonly grows 25 to 30 feet tall.  The Osage-orange is dioecious. Dioecious plants produce male and female flowers on separate plants.  Small green flowers appear on trees in May or June.  Female trees produce 4 to 5 inch diameter fruit that mature in September or October and fall to the ground.  Osage-orange fruit are also called “hedge balls.”  The common names “hedge apple” and “hedge ball” are derived from the widespread use of Osage-orange trees as hedges by farmers in the mid-nineteenth century.

Link to another research site here:

Gifts were exchanged and great camaraderie prevailed all day! I was so happy to see them all together.