Just a funny couple of episodes today. My husband stopped in at the pharmacy (a little hometown one that we have been going to for many years) and picked up a renewal of his monthly supply. It is the first of the month, correct? When he set them on the table in preparation for lining up on the lazy susan in his particular certain order, (there should be 9 refills, yes NINE!) I counted and only could come up with eight! I'm the detail person, you see, and ONE was MISSING!  OK, after determining which one was skipped, and a phone call later, it will be ready for another trip to town tomorrow.

Then, he proceeded to cut all the tablets in one container in half as he has done for the past six months. The darn things wouldn't cut well, even though there was a hatch mark and he was using his handy pill cutter tool. They ended up being a pile of crumbs! I was bumbling around in the kitchen and heard his groans and saw that he was making a mess.  I suggested he call the pharmacy and get new ones because those darn things wouldn't cut correctly! They were faulty!

Discovery.............
You see, in the past, he would only get fifteen instead of thirty and was instructed to cut each in half as that was to be the daily dosage. They cut very well.  NOW the pill comes in the exact dosage that is to be taken and there is no cutting necessary!  An alert about the change in pill would have been nice, I think. BUT, if he had read the label he "might" have noticed that it says to take one a day and that the dose was correct. 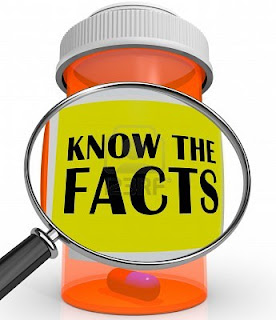 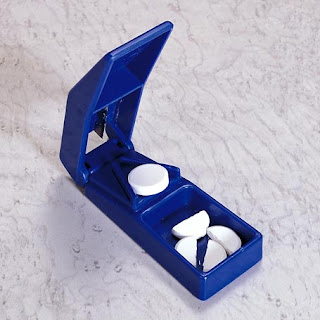 Such is life on the first of May of a rainy day.